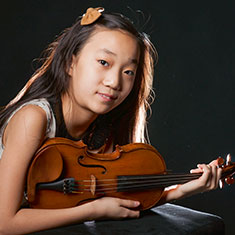 At the age of 14, Elli Choi is a promising artist. She had already performed in the United States, Europe, Avery Fisher Hall, David H. Koch Theater, Lincoln Center, Zurich Tonhalle, Mozarteum in Salzburg ... Elli Choi was born In San Diego and began the violin at the age of 3 years old. A year later she was invited to the World Convention on the Suzuki Method in Turin. Soloist at the age of 5, she performed with the Korea Symphony Orchestra in Seoul. At the age of 7, she performed the Mendelssohn Concerto with the Prague Youth Orchestra at the Dubai International Music Festival for Peace. At 8 years old, she plays the Spanish symphony of Lalo and the Carmen Fantasia with this same orchestra in the Czech Republic and then starts with them a tour during summer 2011 playing the 1st concerto of Paganini. In April 2016 she played with the Berlin Philharmonic. In 2015, Elli won the 1st Wieniawski Prize and the Grand Prize for the Young Virtuoso Competition in Sofia, Bulgaria. She performed with Vadim Repin in Russia with the Berlin Philharmonic at the Chicago Chamber Music Festival ... In 2014 she recorded the 1st Wieniawski Concerto with the Swiss Orchestra of the Interlaken Festival. This was the case over these two years, the previous ones being equally rich. Elli Choi is the youngest beneficiary of the Stradivari Society of Chicago; and plays on a violin three quarters of Joseph Rocca made in Turin in 1852.

Born in 1985 in southern Russia, Nikita Boriso-Glebsky stands out from young violinists of his generation. Former student of the Tchaikovsky Conservatory of Moscow, Queen Elisabeth Music Chapel of Belgium under the direction of Augustin Dumay of the Kronberg Academy in Germany. He won first prizes in 10 prestigious competitions such as Jean Sibelius, Fritz Kreisler, Tchaïkovski, Queen Elisabeth and the one in Montreal. He has previously performed with the Helsinki Philharmonic, Moscow Philharmonic, Brussels, the Varsovia sinfonia ... Since 2007, he has been the exclusive soloist of the Moscow Philharmonic Society. Violinist of the year in 2009 by the Maya Plisetskaya Foundation and Rodion Shchedrin (USA). In 2011 he was also awarded the "Virtuoso" prize by the Italian company for strings and the Antonio Stradivari Foundation, as well as the medal of the birthplace of Jean Sibelius from the eponymous foundation in Finland. 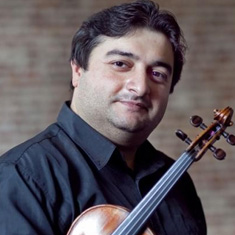 At 37, this Ukrainian violinist is considered the leading player of his generation. At the age of nine he joined the Moscow Central School of Music for gifted children and went on to win numerous competitions, including UNISA in Pretoria in 2002 and the  Monte Carlo Violin Master in 2010. Today, he gives concerts in countries around the world, including France, Spain and Japan, under the direction of such leading conductors as Svetlanov, Ermler and Dmitriev. 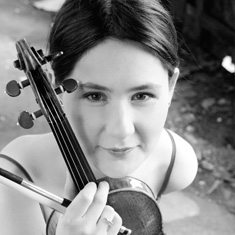 This 27-year-old Parisian began playing the violin at the age of seven. After studying under Larissa Kolos for eight years, her musical skills were mature enough to qualify her for entry into the advanced class at the Conservatoire National Supérieur de Musique in Paris. In 1997, she won the seventh Wieniawski young violinists competition in Poland. In 2007, she recorded her first CD, the complete Eugène Ysaye sonatas for violin, which was warmly received by critics. 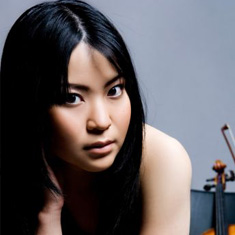 Born in 1986, this young Japanese violinist made a promising debut in Tokyo at the age of 10 when she gave a performance under the direction of Charles Dutoit. Gifted with an extraordinary talent, she went on to perform in numerous competitions and, at the age of 11, won the Menuhin competition. In 2004, she became the youngest musician ever to win the Violin Masters. She has now forged an international career that takes her around the world, from Japan to the USA.